Second Language on the Job (Part 2) 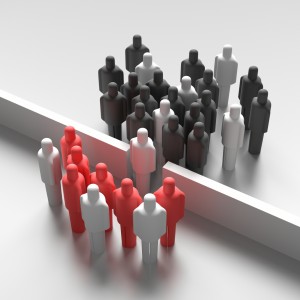 Let’s return to the sensitive issue of speaking a foreign language on the job, during break, in the presence of colleagues who don’t speak that language. I refer here to conversations where someone who is sharing a space with those speaking the other language has no sense of what coworkers are talking about with one another. I’m not referring to situations such as colleagues pleasantly chatting in, say, Spanish, in an otherwise empty lunchroom, or where a person is conversing on the phone in Polish with their elderly mom. I’m also not referring here to the occasional greeting or very quick exchange, which come naturally to those of us of the same background whenever we interact with one another, before we realize that there’s someone around who does not understand and might feel excluded. And I am not referring to workplaces where english is not a requirement of the job and where most people speak little or no English.

As someone who is an immigrant myself, and who is never completely comfortable in English (to this day I take all notes in my mother tongue), I understand firsthand the challenges of sticking to English with members of my culture, and am personally and acutely aware of the multi-dimensionality of this issue. So please bear with me as we embark on a longer-than-usual blog entry this once. After all, it’s a complex matter, even emotional for some. It’s situated on the intersecting point of hot-button issues such as human rights, civility, inclusion and an employer’s duty to provide a healthy work environment – to name a few.

Last time we left off saying that many employers use incomplete lenses when they examine this matter, which leads them to unsatisfactory results. These lenses can be described as falling within two clusters:

Cluster 1: Should we – and can we – limit foreign languages in the workplace?
Cluster 2: If we decide to place limitations, how should we go about doing so?

So, lets look at ‘Cluster 1’. Here are some prevalent lenses that employers use to answer the “should we, can we”:

The above lenses frame the issue predominantly as a ‘human rights’ or a ‘diversity’ matter. And yes, our dilemma here does touch on these two issues. However, to conclude that people have an absolute right to speak their language at work ignores the fact that many of the human rights that we celebrate in a democratic society are limited (if not totally non-existent) in the workplace. This is because no right is absolute – all rights are continuously weighed against other rights which may trump them in certain contexts.

And what about the ‘diversity’ lens? well, a truly diverse environment is one where there’s some give-and-take so that everyone can feel included and safe, whether they are members of a privileged group or not.

Here’s what’s missing: absent are the lenses of Inclusion, Civility, Community and Performance. In the matter of speaking a foreign language at work, I believe that these lenses trump the ‘right’ to speak a foreign language in the presence of colleagues who do not speak that language.

The Inclusion lens means that human interactions in the workplace are inclusive.

The Civility lens means that people in the workplace abide by the most basic rules of common courtesy and ‘playing nicely in the sandbox’, which, frankly, are tenets of any culture worldwide.

The Community lens enables people to function in an environment where everyone works toward common goals and the common good.

And the Performance lens enables employers to create the conditions where everyone can perform at their best because their performance is not hampered by skewed team dynamics or excessive stress hormones triggered in their body. (The effect of ostracism on the brain and on people’s well-being has a meaningful effect on people’s ability to perform on the job.)

For those who wish to speak that second-language, shifting to English does not amount to what is often referred to as ‘undue hardship’*. On the other hand, if they do speak that other language, this practice marginalizes those who do not speak that language.

Over time, as I had learned all-too-often from the many situations that have come to my attention through Bar-David Consulting’s organizational clients and through workshop participants, exclusionary language practices create friction amongst team members along cultural and heritage lines — they jeopardize the delicate balance that is inherent in maintaining a diverse workplace and calcify the boundaries between diverse groups. Under the umbrellas of ‘diversity’ and ‘human rights’, these practices erode civility, community, and performance.

An organization is fully within its rights to place inclusion, civility, community and performance as overarching values and to embed these lenses into its practices. When an organization takes a well-thought-out stance that is applied across the board and is genuinely intended to enable everyone to feel part of the work environment whether on shift or on break, it is not in violation of anyone’s human rights, nor does it meander into counter-diversity terrain. This is all the more true when the implementation of these lenses is done in inclusionary ways that involve as many employees as possible in meaningful dialogue (and buy-in) related to this issue.

Don’t hesitate to get in touch for any need or exploration with which we might assist you.