Is It Harassment? Try Our Twist Test™. 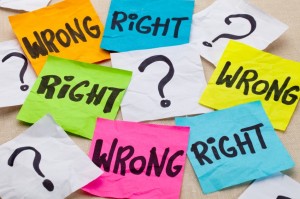 Let’s say that you just observed a behaviour in the workplace that somehow made you uncomfortable, where your gut tells you that maybe some offensive line was crossed. Or – heaven help us! –  let’s say that it was you who said or did something that makes you wonder whether you’ve just crossed that elusive line between ‘appropriate’ and ‘inappropriate’.

But you’re not really sure. The more you mull it over, the less sure you are.

You’re not alone. These ‘grey’ harassment situations are very difficult to diagnose. And if we don’t diagnose properly, we also cannot take intelligent action.

There’s a little thinking-tool I’ve devised, to be used a litmus test. I call it The Twist Test™, and here’s how it works: When you’re unsure whether ‘the line was crossed’, take one fact related to the situation, change it (=twist) and see whether the answer becomes clear.

Here’s an example – based on a real-life situation:

A well-liked colleague has a strong French accent. It’s actually cute and endearing and everyone comments on it on a regular basis, mostly fondly. One day as you’re listening to that colleague’s presentation to a large group, another colleague whispers to you: “hey, what do you think – is she speaking English or French right now?”.

You feel uncomfortable and confused by this comment, but not sure how to react.

This is a great opportunity to use ‘The Twist”! Ask yourself, “If this person had another type of accent (Chinese, Arab, Indian….), would it be okay to make these comments?”. If your answer is ‘no, it would not be okay to make this comment’, then diagnostically the line between ‘appropriate’ and ‘inappropriate’ had been crossed. The comments about the French accent should cease.

Typical situations to use The Twist Test™ might be:

In your team, consider the following questions:

This entry was posted in Blog, Thought Boosters. Bookmark the permalink.